All tech companies draw international talent, but arguably none more so than IBM. Our Analytics Development team alone has labs in Canada, Germany, India, Japan, China, and the US. It’s fascinating for me to hear first-hand the different paths you took to IBM; we are richer for your talent and for the different ways of thinking and for being you and what bring to the team. From Martyna, I learned what it’s like to live in a tiny village in Poland, steeped in the intimacy of village life and in Poland’s tradition of excellence in mathematics.

You came to IBM as an intern from the University of Saskatchewan. What was it like, moving from the prairies of Canada to the big city?

Leaving my village in Poland was much harder than moving from Saskatoon to Toronto. I grew up in a village of just 500 people, so when I left at 19 years old I was saying goodbye to many people I’d known since I was born: friends and family, but also the people in the shops, the personae of village life. In a small village, people are always helping each other; you know everyone. Now I live in an apartment building in Markham and I don’t know the people living next-door! 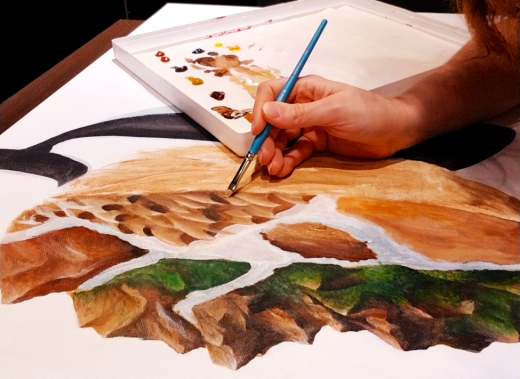 What was it that led you to choose computer science as a field of study?

Both my parents had studied math, so that was the family business, you could say, and my plan going into university – that lasted about eight months, by which time I’d had enough of calculus to last a lifetime. I took one computer science class and absolutely fell in love. After three years I interviewed at IBM and I can now admit that I was extremely stressed about it! I hardly slept the night before. I wanted so badly to work for IBM. I got the job, and it was a dream come true. My parents, on the other hand, were supportive but disappointed, in a minor key, not by IBM but by my choice of field: I was the last hope in the family to carry on their math legacy (my sisters, most rebelliously, studied psychology and neuroscience), so when I told my father his comment was, “Well, better computer science than statistics.”

You are practically a black sheep! Why was computer science love at first sight – or first class – for you?

Because it’s not about solving the equation. It’s about creating universal solutions, and I found coming up with innovative ways to solve a problem intensely rewarding. Part of it is the immediate value. I have a problem, I write a program, problem solved. It takes longer to write a big piece of software, but each function is a tangible step towards your goal. In math, you come up with a theorem and it takes months to prove. You could have an idea and start exploring it just to realize a week later that you’ve hit a dead end and you have to start all over again.

The potential for real-world application is also satisfying. My parents’ work might find its applications in 50, 100, or 200 years — that doesn’t mean it’s less valuable, but since I’m a very impatient person I wouldn’t be able to do work with gratification delayed beyond my lifetime. I need to see the impact of my work right away.

What are you working on now?

I work on the infrastructure team, maintaining an environment for testing. Some of the work is fascinating, and some is not especially glamorous, but at IBM you always have a bonus factor: the people are wonderful. That’s what really makes the difference in my work – solving problems with very smart people from all over the world, who also happen to be incredibly nice to be around.

You’ve perhaps found some of the sense of community of your home village — or fostered it, here at IBM. What do you like to do outside of work?

I find myself drawn to the most tedious hobbies imaginable. I picked up painting recently, and I sew … painting was an antidote to being on the computer for hours and hours, a way to rest my eyes and my mind and to be creative using a completely different part of myself. I’ll sit in front of a canvas for hours painting, I find it deeply relaxing. I need to be completely clear here: I have no talent, none. I paint because I love it!

I also have a cat, named ‘Data’ – she has chewed through 23 computer cables in my home. I’m counting, because I actually find it kind of impressive – her focused dedication to cable destruction.

A lot of the people I interview seem to like food – Sebastian Muszytowski, one of our Python experts in Boeblingen, loves to bake, and Phu Truong knows all the best places to eat out in San Jose.

What do you see yourself doing in the future? What excites you?

That’s a tough question! I suppose it’s having an impact. Right now, there is a lot of potential on the infrastructure team – we’re planning to create some regression tools and leverage automation, which is all very exciting!  but the minute I notice there are not as many areas to improve, I will look for another role at IBM.

Yes, it’s important that we use our own machine learning technology, so that’s wonderful.

Absolutely, and the potential is so exciting. Sometimes I’m working on code developed years ago, so I can’t just stroll over to the creator and ask about it, but if we can create self-healing technology, imagine the possibilities!